Reporting Day: 20th August 2013 Recently, we came out with our analysis of Rule-X against single day fall of NIFTY(NIFTY Mayhem and Rule-X). We have also provided Portfolio Builder tool to validate the performance against historical data. In this article we have covered single month performance (July 2013) for complete review of APS/Rule-X. Our performance benchmark is NIFTY. NIFTY has historically returned decent profits in the long term (NIFTY Historical Performance), so, if our strategy is performing better than NIFTY it will also yield decent returns (or better than NIFTY). Professional fund managers also measure the effectiveness of investment strategy against such benchmark. Any extra percentage gain (or save in case of loss) against benchmark is called Alpha. If a strategy can generate overall (portfolio wide) alpha then it is considered a good strategy. We have taken investment period 1st July 2013 to 31st July 2013 and valuation has been done on 20th August 2013 (End of the day). During this period NIFTY has lost value by 8.43%. At the same time if an investor would have followed just Rule-X triggers (on daily basis) then such investors would have lost just 2.76%. APS which is a combination of three rules Rule-A, Rule-D, & Rule-X and advocates only weekly trading has made loss of 2.56%. Following is the graphical representation of the same. 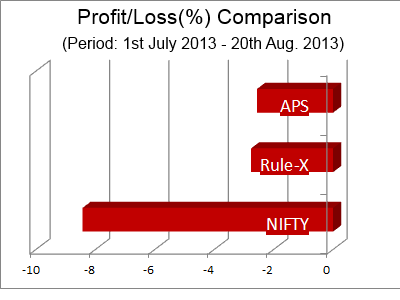 Relative Profit Loss Comparison
It is evident that both kinds of investors have been successful in generating alpha. Coming down to more microscopic view of the trades recorded during the same phase.